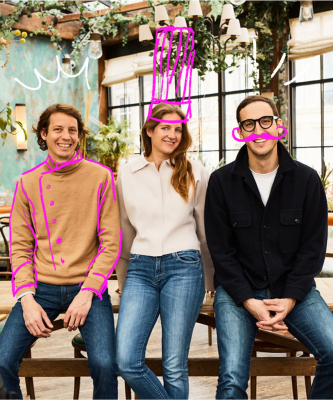 Sunday, a startup that didn’t exist just a few months ago, has raised a $100 million Series A funding round. Today’s funding round is led by Coatue with participation from partners of DST Global. Investors in the restaurant, hospitality and tech industries are also participating.

I already wrote a lengthy profile of Sunday when it announced its $24 million seed round back in April. I encourage you to read it in case you want to learn more about the company.

Sunday was founded by Victor Lugger, Tigrane Seydoux and Christine de Wendel. The first two co-founders in this list are also the founders of Big Mamma. Christine de Wendel was previously the head of France at Zalando and the COO of ManoMano.

Essentially, the startup has developed a checkout system for physical restaurants. You can put QR codes on tables, customers can scan this QR code and browse the menu. When everyone is done, you can scan the QR code again to check the bill, leave a tip, split the bill and walk away. Customers can pay using Apple Pay, Google Pay, American Express, Visa and Mastercard.

And it’s an easy sell, as most customers choose to pay using the QR code. Restaurants can save in wait time and get a better table turnover rate as people tend to leave the restaurant more quickly. Of course, some people want human interactions when they go to a restaurant and Sunday thinks those interactions can create friction. Not everybody will be a fan of the product.

While Sunday launched its product just five months ago, 1.1 million people have used Sunday to pay for a restaurant bill already. More than 1,500 restaurants are using it around the world. The startup is executing at a rapid pace, as it has hired 170 employees across five countries — the U.S., the U.K., Spain, France and Canada.

With the new funding, the startup plans to expand to new restaurants and launch new features, such as table booking, ordering and loyalty programs. And the company wants to increase its growth rate. By the end of 2022, Sunday hopes to work with 15,000 restaurants. The team will also double in size over the next 12 months.

“This new investment round is a remarkable opportunity for Sunday to build a powerful tech stack and develop new product features such as ordering & loyalty programs. It also allows us to accelerate in the U.S. market by growing our sales, operations and partnerships teams. We are now in a very good position to hire top talent to drive the speed and stellar execution needed to succeed,” co-founder and CEO US Christine de Wendel said in a statement.

Inside a European push to outlaw creepy...

Inside a European push to outlaw creepy ads

What is the Government’s Plan B? All you need to

Woman fatally shot, another injured on the set of Alec