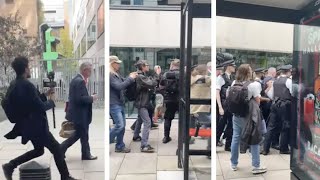 Michael Gove had to be escorted by police away from an anti-lockdown protest after demonstrators tried to surround him in the street.

The Communities Secretary was approached by a number of people with video cameras as he walked through central London.

Footage shared on social media showed the Cabinet minister quickly being encircled by police officers, who moved the protesters back.

The Metropolitan Police tweeted: “We’re aware of a protest in Westminster today which is marching to a number of locations.

“During this protest, a group attempted to surround a Member of Parliament on Horseferry Road. Our officers were immediately on scene where they safely escorted him to a nearby building.”

Officers then put themselves between the MP and protesters as they helped him to make his way into a nearby building. Amid jostling as officers attempted to keep demonstrators back from the entrance, a man appeared to shout “Arrest Michael Gove”.

One person who approached Mr Gove asked him how he justified “illegal lockdowns”.

The Met said there had been no arrests following the incident, but that they would review footage circulating online as well as officers’ body-worn video “to see if any offences occurred”.

Downing Street has said the targeting of individuals because of their support for the Covid vaccines was “abhorrent” and should not be tolerated in a democratic society.

After Mr Gove was surrounded by anti-lockdown protestors, the Prime Minister’s official spokesman said: “The approach we have taken, particularly on issues such as vaccination, is to provide clarity and information to provide reassurance to those who have legitimate questions.

“What is completely unacceptable is for those who disagree with our approach to try and target individuals, be they ministers or schools or parents and children.

“That sort of behaviour is abhorrent and will never be tolerated in a democratic society.”

Sadiq Khan, the Mayor of London, condemned the treatment of Mr Gove and thanked police for stepping in.

“This is just wrong,” Mr Khan said. “Politicians should be able to go out without being intimidated or fearing for their safety.”

EU warns adtech giants over ‘legal tricks’ as it moots

Old Bexley and Sidcup by-election result: Tories win but with