Boris Johnson has been urged to bring clarity to Christmas plans, as the festive period was thrown into limbo amid uncertainty over new restrictions.

The Prime Minister was blocked by his Cabinet from introducing immediate new restrictions, as at least a dozen ministers spoke out against plans for further curbs during a two-hour special meeting on Monday.

Mr Johnson said that while there would be no new restrictions now, he would not rule out the possibility of bringing them in later – in contrast to Nicola Sturgeon, Scotland’s First Minister, who promised no changes to her Covid rules “up and over” the Christmas weekend.

Half an hour after the Prime Minister’s address, the Queen announced she was cancelling her trip to Sandringham for the second year running and will instead spend Christmas at Windsor Castle.

MPs believe further restrictions are unlikely after last week’s rebellion and Lord Frost’s resignation made it clear that the Prime Minister would face huge opposition if he tried to bring in more measures. 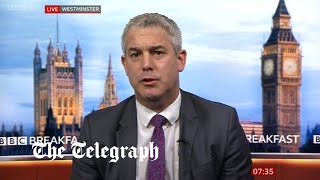 MPs have demanded clarity from Mr Johnson over whether Christmas and New Year plans could go ahead without fear of them being scuppered.

Dehenna Davison, a Tory MP, said she had been inundated by pubs and restaurants asking if they should order food and drinks. “I’ve had emails from people asking if they should postpone their wedding for the fifth time or if they can see their mum on Christmas. We really need some certainty,” she said.

Tim Loughton, a former minister, said he had been contacted by couples planning New Year’s Eve weddings wanting to know whether to cancel. “What do you do with something like that?” he asked. “The uncertainty is the real killer for people and businesses. We need to put greater certainty back into the system.”

The Government’s Scientific Advisory Group for Emergencies (Sage) warned at the weekend that daily hospital admissions could reach 3,000 without further restrictions.

But more than a dozen ministers are said to have spoken out against any further curbs with just four – Sajid Javid, the Health Secretary; Michael Gove, the Levelling Up Secretary, Nadine Dorries, the Culture Secretary; and Simon Clarke, Chief Secretary to the Treasury – in favour.

Ministers refused to back any additional curbs until government scientists provided better data to demonstrate a link between rising omicron infections and hospitalisations and deaths. UK health officials said omicron cases rose by 6,777 to 41,250 in a day, with 12 deaths and 104 hospitalisations.

It is understood Rishi Sunak, the Chancellor, is resisting because of the economic damage of any new curbs. “The Treasury is digging its heels in because of the cost of the measures,” said a source.

Indicating that new measures were unlikely before Christmas, Mr Johnson said there were still “uncertainties” around the severity of the new strain, as well as the rate of hospital admissions associated with it and its impact on the effectiveness of the vaccines.

At the same time, he said ministers needed to take account of the economic impact of any new measures – particularly on those sectors which were already struggling due to the pandemic. “There are still some things that we need to be clearer about before we decide to go further,” he said.

However, he said the arguments for further restrictions were “very, very finely balanced” and the omicron data was being monitored “hour by hour”.

“Unfortunately I must say to people that we will have to reserve the possibility of taking further action to protect the public, to protect public health, to protect our NHS,” said the Prime Minister.

“We are looking at all kinds of things to keep omicron under control and we will rule nothing out. But at the moment, what we want people to focus on is exercising caution.”

Indoor mixing could be limited under future Covid restrictions

The Cabinet is expected to meet again within days to review the data and possible restrictions. Discussions have already been held between government officials and the Commons Speaker’s office about recalling Parliament next week to debate possible further restrictions.

Government sources suggested that the middle of three options was being considered which would see the return of household bubbles, curbs or partial closure of pubs and restaurants but shops and leisure facilities remaining open.

The most likely model that could be adapted is step two, which would restrict pubs and restaurants to outdoor dining, limit indoor socialising to one household and a support bubble and introduce the “rule of six” or two households meeting outdoors.

In a statement posted on social media, Ms Sturgeon gave Scots the green light for their Christmas Day plans after stating she had “no intention” of making any last-minute changes to her Covid rules.

The First Minister said she was not planning on changing her advice on household mixing in Scotland “up to and over” the Christmas weekend. She said she wanted to provide “clarity and certainty” that people could proceed with their original plans.

We must restore decency, honour and trust...

Bitcoin’s Fair Value Is a Lot Less Than the Market

Microsoft to Buy Activision Blizzard in Mega-Deal Worth $68.7 Billion