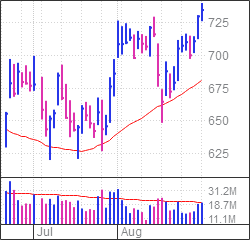 Tesla (TSLA) is the IBD Stock Of The Day, as the EV maker remains in buy range after clearing an aggressive entry as a launch in the Indian market edges closer. Tesla stock rose.


On Monday, the company received local approval in India for the launch of four vehicles. That likely means some version of the Model 3 and Model Y were deemed roadworthy in India. This step was necessary to set the stage for the launch of sales in India. Tesla CEO Elon Musk has been pledging to enter the India market for several years.

But regulatory scrutiny in the U.S. is a concern for Tesla stock as CEO Musk continues to tout the electric cars’ driver-assistance technologies.

Shares rose 0.7% to 735.72 on the stock market today. Tesla stock popped above an aggressive buy point of 730 on Monday, according to MarketSmith chart analysis. The buy zone runs to 766.50.

Earlier this month, shares bounced above a test at the converged 50- and 200-day lines, a bullish sign. Meanwhile, a deep large base continues to form.

With a Composite Rating of 92, Tesla stock is ranked first in the IBD automakers industry group.

Tesla stock action has been resilient despite growing government scrutiny of its Autopilot capabilities.

The National Highway Traffic Safety Administration launched a formal investigation on Aug. 16 into 11 crashes that injured 17 people and killed one. The accidents involved first responders on the scene. In fact, last weekend a similar accident occurred in Orlando, Fla.

Additionally, on Aug. 18 lawmakers asked the Federal Trade Commission to probe what they consider Musk’s persistent misrepresentations, which they say endanger Tesla drivers and the driving public at large.

Despite the crackdown, Musk last week touted that Tesla’s next version of Full Self Driving beta software would be available to the wider public in about four weeks. Tesla’s self-driving capabilities are actually Level 2. Industry standards describe autonomous driving that doesn’t require driver assistance as Level 4 and up.

And like other automakers, Tesla continues to struggle with supply-chain issues due to chip and battery shortages.

Why This IBD Tool Simplifies The Search For Top Stocks

How To Know It’s Time To Sell Your Favorite Stock

QuantumScape Reported a Surprise Profit. The Stock Is Dropping.