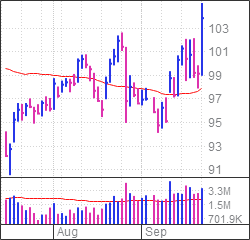 Dell Technologies (DELL) is the IBD Stock of the Day as investors mull the computer hardware giant’s outlook after its spinoff of VMware and a new $5 billion buyback announced Thursday.


The Round Rock, Texas-based computing company hosted a virtual analyst day on Thursday. Ahead of the meeting, Dell announced a $5 billion buyback. In addition, Dell said it plans to initiate a quarterly dividend in the first quarter of its 2023 fiscal year.

Dell expects revenue growth in a 3% to 4% range through fiscal 2026 after the VMware spinoff, which is expected to finalize in November. Dell forecasts adjusted per-share earnings growth of 6% or more annually through fiscal 2026.

Amid the analyst day, Dell stock gained 4.6% to 103.79 on the stock market today. With the gain, Dell stock moved into a buy zone. The tech stock had topped a 100.93 cup-with-handle buy point on Aug. 24. It soon fell below that level but climbed back above it Thursday with solid price and volume action.

Dell stock has advanced 40% in 2021. Most of the gain came after the maker of personal computers, servers and data storage gear announced terms of the VMware spinoff in April.

VMware will pay a special dividend of $11.5 billion to $12 billion to all shareholders. Dell will receive 80.6% of the dividend, or in a range of $9.3 billion to $9.7 billion. Dell is expected to use some of the proceeds to reduce its $19 billion adjusted debt on the balance sheet.

The company aims to regain an investment-grade corporate-family credit rating. Dell took on a massive debt load when it bought EMC in 2016 for $67 billion in cash and stock.

In addition, Dell and VMware will sign a five-year commercial agreement that will preserve their existing marketing partnership.

In the June quarter, Dell’s personal computer sales rose 27% to $14.3 billion in the fiscal second quarter. The work-from-home and school-at-home trends spurred by the Covid-19 pandemic continue to fuel PC sales.

Dell stock hit resistance at just over 102 prior to the analyst day. Raymond James analyst Simon Leopold in a preview of the analyst day said: “We imagine some Dell holders acquired the stock based on a thesis of unlocking the value of the VMware holding, and these investors might consider the spinout of VMware a catalyst to take profits.”

“Year to date, Dell’s PC sales are up 23.5%,” he said. “We had not imagined the pandemic-stimulated market would stay healthy this far into the cycle, but the combination of supply chain constraints and strong demand have supported the growth.”

Dell stock has an IBD Composite Rating of 87 out of 99, according to IBD Stock Checkup.

Dell stock owns an Accumulation/Distribution Rating of B. That rating analyzes price and volume changes in a stock over the past 13 weeks of trading.

“While Dell investors are worried about shrinking server demand as more workloads move to the cloud, we believe the edge opportunity can help offset this risk and that Dell is well-positioned to capture share given its scale and services expertise,” Huberty said in her note to clients.

In edge computing, data center infrastructure moves away from centralized locations. Computers, storage and networking are placed close to where data originates. That could be a factory, hospital, transportation hub or retail store.

If you’re new to IBD, consider taking a look at its stock trading system and CAN SLIM basics. Recognizing chart patterns is one key to the investment guidelines.

IBD offers a broad range of growth stock lists, such as Leaderboard. Investors also can create watchlists for issues such as Dell stock, find companies nearing a buy point, or develop custom screens at IBD MarketSmith.

How This IBD Tool Simplifies The Search For Top Stocks

Find Compelling Growth Stocks With IBD’s Stock Of The Day

Get A Free Trial Of IBD Leaderboard

Inside a European push to outlaw creepy...

What is the Government’s Plan B? All...

Inside a European push to outlaw creepy ads

What is the Government’s Plan B? All you need to

Woman fatally shot, another injured on the set of Alec